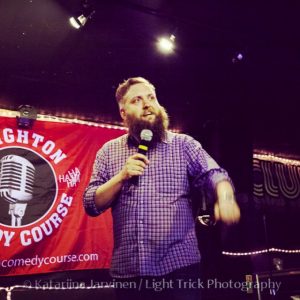 In March 2012 I received an email from Phil Jerrod three days before the beginners comedy course started. There’s nothing like leaving it last minute! Luckily there was a cancellation so he was able to come on board.  He was juggling his full time job in publishing and a PhD.

He certainly did shine and I knew with hard work & determination that Phil would make it to the big time.

Well, talk about fast track, they say rule of thumb is around 8 years for a comedian to work the circuit and make their mark. In less than two, Phil was signed up by one of the biggest agencies in Britain, Off the kerb, agents of Dara OBriain, Allan Carr, Jo Brand among many.

Phil was the official tour support for Romesh Ranganathan, Seann Walsh and Angela Barnes. Writer for radio and television shows The Now Show, The News Quiz, and Mock The Week.

“I enjoyed the course very much. I felt really prepared for my first gig, properly rehearsed. I liked the space given to performance time, this was the most helpful part of the course, actually standing up and trying to be funny and getting feedback on what you’d done.

The course was well structured and built nicely towards the final performance. It was good value for money, in retrospect it is possibly under priced. The content is definitely worth the money. This course was one of the most rewarding things I have ever done. ”

Here’s what the reviewers say out Phil;

“Made me genuinely laugh out loud” – The Brighton Argus