Meet Louise Stevenson, our northern Comedian-in-Chief, who teaches people to be more confident in front of an audience. Hello Louise!

Let start at the beginning, what is the origin story behind Brighton Comedy Course?

The business started in 2011 and I was teaching people specifically to be stand up comedians, and then a few years later we launched speakeasy coaching which is specifically to help people with public speaking. 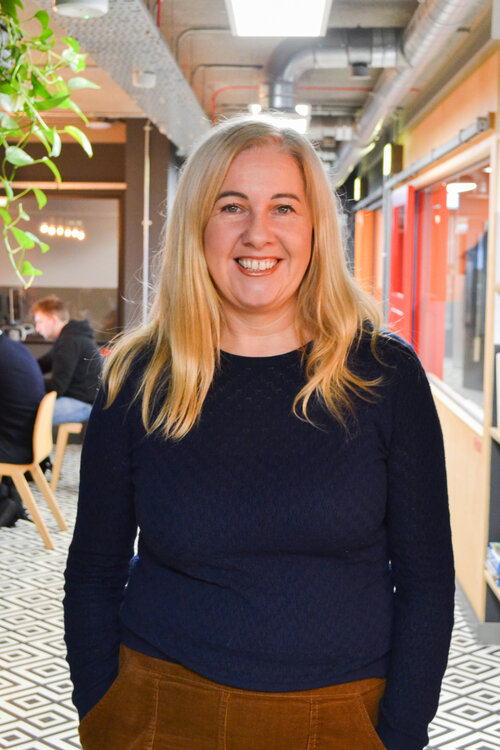 And how do you teach people to be funny?

I think giving people tools and techniques that they’re able to have a look at, and getting them to come to workshops. The workshops are eight weeks, for the beginners course. So they practice every week, they have an opportunity to write every single week because they have homework. They learn techniques, they learn the theory behind comedy, they start watching stand up comedy and being a lot more analytical about what’s going on in front of them. Not just what the comedian’s saying, but what actions and other devices that the comedian’s using to bring the funny.The first week is really about getting people to come out of their comfort zone, getting them comfortable enough to get up on stage for starters. It’s about getting them in that team mentality, that we’re all in it together and we’re all going to graduation and we’re all going to do a live gig at the end of the course. So that’s really the first step.The comedy course is a great way for them to experiment with different styles of comedy. So in week 3 we look at 4 different genres of comedy; observation, one liners, improv and storytelling, which are probably the most popular styles of stand up comedy. So we look at the techniques, and then comedians start thinking about what style of comedy might suit them. The comedy course is really about experimenting with different styles of comedy, so that they know what they are, they can identify different styles of comedy and start seeing what works for them.

Have you always been confident in front of an audience?

Well I’ve been doing stand up for 20 years so I would hope so! I think the more you do it the more confident you get. I’ve got a gig on Saturday and I will still have nervous adrenaline, which is great, it’s excitement. You need that kind of nervous excitement to have a good gig. I would say I have more confidence 20 years later than I did in 1999, for sure, but I think that’s something that’s developed. The more you come out of your comfort zone, the more you become confident. I don’t think there’s any mystery to it.

Is there an event you are looking forward to attending at PLATF9RM?

The Cereal Filler that I am speaking at in January, I’m very excited for that! I’m also looking forward to an event I’m running in public speaking here in March or April, we’re just finalising the date. It’ll be really lovely to be able to run that for co-workers. So yeah I’m really looking forward to that.

If you could meet someone famous, dead or alive, who would it be and why?

I’d say Kevin Bridges, because I would like to have a pint with him. And I’ve never worked with him, I have Frankie Boyle etcetera but I just never got round to working with him so.. Kevin Bridges for a pint, alive. If I had to pick someone dead, Nelson Madela would have been amazing to meet. Just how determined and inspirational he was.

What is your biggest pet peeve?

Hmm. People not saying what they mean. So I find that in Scotland people are very direct. Whereas, for instance, when I’ve had sales jobs in the past, people would have you phoning back, and phoning back, but actually they’re not interested. There are nice ways to say things, but just being up front and saying what you mean, I wish people did it more.

And finally, what superpower do you wish you had ?

Being invisible! Don’t ask me why! Ha! I just think being able to have a nosy at big decisions that are being made would be great. But yeah, it just really appeals to my curiosity about people, where you could just be a fly on the wall kind of thing.

Thanks very much Louise.

Louise will be running a one-day workshop Pitch & Present, next Friday 17th in Brighton. You can book on