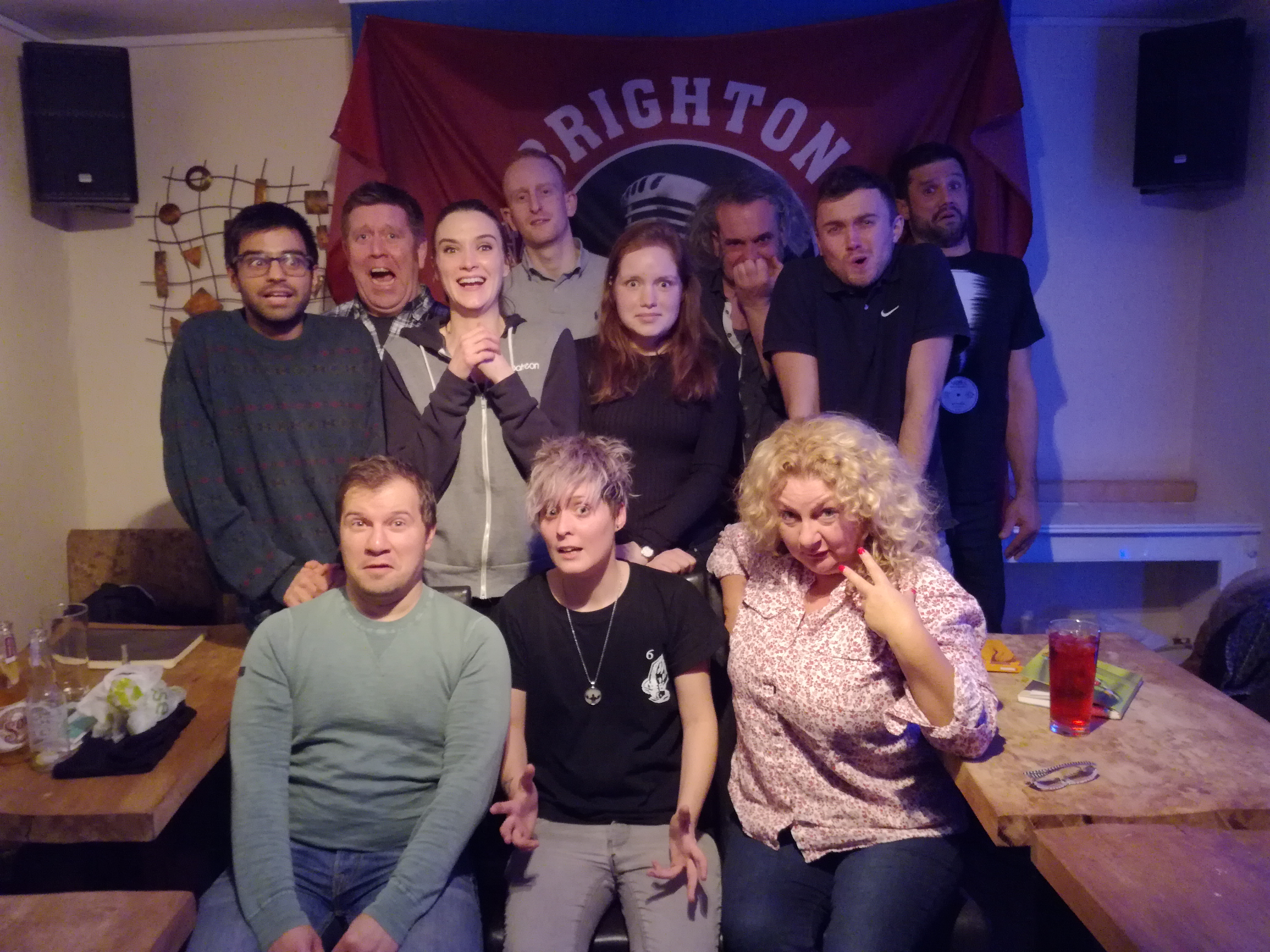 Thirteen Brighton Comedy course students will take the stage next month for their first ever gig! Every week they have been writing, editing and producing fantastic comedy material. The topics, like the students, are diverse and interesting. We have an international feel this year with a French student, a Dutch student and a Bristolian! All from different walks of life, including a burlesque dancer, a teacher, a social worker, a TV casting director and a yoga instructor (of course, its Brighton.)

They will take the plunge on Thursday the 9th of March at the Funky Fish Club in Brighton at 7.30pm. It is sure to be a great night. Compere for the evening, founder of Brighton Comedy Course and teacher, Louise Stevenson. Come, see them do their thang!

The year has started off strong with the first beginners course almost sold out. These new bunch of students will start the course on the 31st of January and will be graduating around mid March. If you want to see just what you can get out of a comedy course you shouldn’t miss the Graduation comedy night. I will announce the date when its confirmed.

Also this year, Louise from Brighton Comedy course will be putting her Masters degree in Creative writing to good use and teaching a beginners course in creative writing on Feb 2nd in Brighton. Louise says “This course is perfect for absolute beginners or for people who are already writing and are looking for motivation and encouragement.” To book go to https://www.facebook.com/brightoncreativewriting/.

Can’t wait to see the new talent that comes out of Brighton comedy course this year. Very much looking forward to 2017. May your year be prosperous.

You’ll be prepared for your biggest challenge- to take to the stage and perform.

Your family and mates will be well impressed.

You’ll have a clearer idea how to write, edit and deliver for an audience.

The ins and outs of the comedy world will no longer be a mystery.

Pitching for business or speaking appointments will never faze you again.

You’ll feel massively proud of yourself for taking the challenge.

You will laugh a lot.

You’ll be a funnier human being.

Don’t just take my word for it-check out the testimonies page on the website.

Whoever said laughter is the best medicine wasn’t far wrong – although they obviously hadn’t tried Valium.

The physical, psychological and social effects of humour and laughter are as bountiful as Donald Trump’s frontal hair shelf. Studies show that humour and laughter strengthen your immune system, boost your energy, diminish pain, and protect you from the damaging effects of stress. In fact a good old belly laugh can leave your muscles relaxed for up to 45 minutes.

Making people laugh is therefore giving them a unique gift. And the amazing thing about laughter is that it’s free – unless of course you’re lucky enough to be at one of Brighton & Hove’s many brilliant comedy nights, in which case it can cost you anything from £3 – £30, depending on the experience of the comedians.

If you’ve longed to have your entourage in stitches, but can only ever seem to muster a joke from last year’s Christmas cracker, then help is at the end of your funny bone.

And who knows, you could go on to be the next stand-up sensation like several previous graduates, including the hilarious Phil Jerrod. The world is your Apollo!

I met up with Louise after Brighton Comedy Course’s most recent graduate gig at The Verdict in Kemp Town to ask her a few questions about life in the laughter lane:

1. What made you get into comedy?

Honestly, I love making people laugh and thought I could. I had just moved to Wellington, NZ and I shared my aspirations with the first woman comic I saw performing and she just happened to have space on her comedy course which started the next day, fate maybe.

2. What are the highs and lows of being a stand-up comedian?

Highs are coming off a stage to a big audience who’ve really enjoyed you. Lows are the travelling from town to town staying in places on your own (there’s a lot of cinema!), And the combination of a high and low is where a woman comes up and says “ My boyfriend totally laughed his arse off and he never thinks women are funny!”

3. Who is your favourite comedian and why?

Kevin Bridges, because he’s hilarious and talks about a lot of things that I can relate to coming from Glasgow.

5. How has being a comedian changed you?
Now there’s a question, well it’s given me much more confidence over the years, it also gives you the balls to share something you thinks funny without worrying what the response will be. Who cares-you won’t know its funny till you put it out there.

6. What are 3 main things you hope people will get from your course?

Confidence, the ability to perform a tight set, and a love of comedy.

Give yourself and others the gift of laughter today by booking a place on the Brighton Comedy Course. Gift Vouchers available.

Exciting news, Brighton Comedy Course is now booking now for the Advanced comedy course. This for students who have graduated from BCC 8 week course or for comedians who have experience working the circuit. The course will run for 5 weeks, giving students plenty of time to write and rehearse lots of new material. There will be less theory and more writing and rehearsal time. For more info have a look on the course page.

To book now go on-line or drop me a line with any questions. Gift vouchers are available too.

All details are in the Fringe brochure- shows start this weekend-there’s some quality comedy, lots free too.

3. Andrew Ryan- An Irish funny guy-what’s not to like? free and ticketed.

4. Humans. funny man Chris Stewart and the hilarious Phil Jerrod, who as well as coming from Brighton Comedy Course was also signed up this year by the agents Off the Kerb.

5. Muffraggette- Irish and one of the funniest stand ups females I’ve seen. £5 on the night.

We are almost half way through this 8 week course. It goes so quickly! Everyone in the class is making great progress. Some have said that they can feel their confidence growing all the time which is fantastic to hear. Last night we looked at body language and integrating improv into our comedy sets. It was a fun night with some well deserved drinks at the end. It’s all about the balance! There’s more hard work ahead as we head for the graduation night on Friday the 2nd of May. 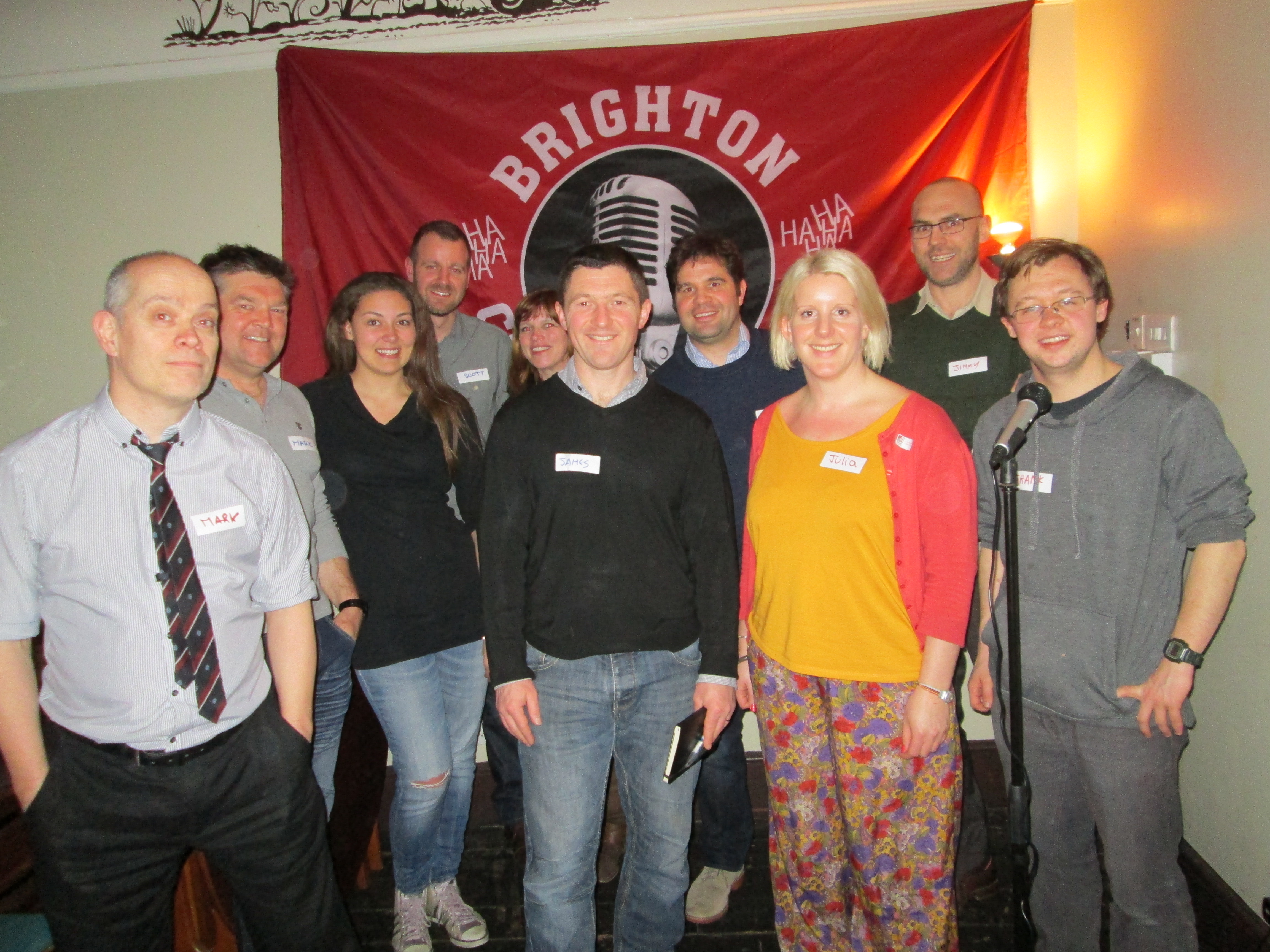 A new bunch of students started the 8 week comedy course last night. It was a full house for the first course in 2014. Every one of them stood up and performed for the first time after a short material writing exercise, and I have to say the standard of delivery was pretty impressive. There was one, (there always is) who thought that comedy was all about the birds and the booze. I had to break it to him that there’s a lot of hard work, writing and editing ahead and then maybe the booze and birds! There were some great lines and I’m thoroughly looking forward to seeing what develops. I’ll keep you posted on the blog. Well done all-great first night. 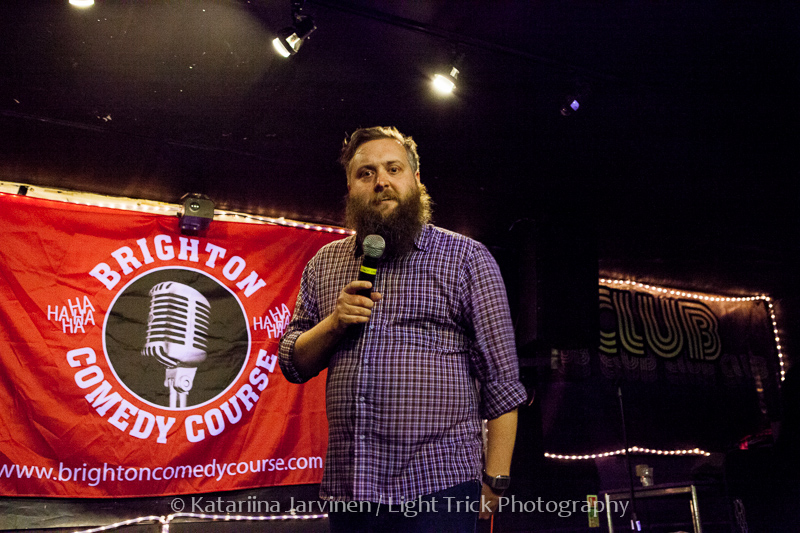 Phil Jerrod graduated from Brighton Comedy Course in 2012. I must say he did shine and I knew that with hard work and determination that Phil would make it to the big time. Well, talk about fast track, they say rule of thumb is around 8 years for a comedian to work the circuit and make their mark. In less than two, Phil has been signed up by one of the biggest agencies in Britain, Off the kerb, agents of Dara OBriain and Jo Brand among many. I am so pleased for him and know it won’t be long before we see him on our screens. Look out for him on Mock of the week, bearded fellow. Well done Phil. 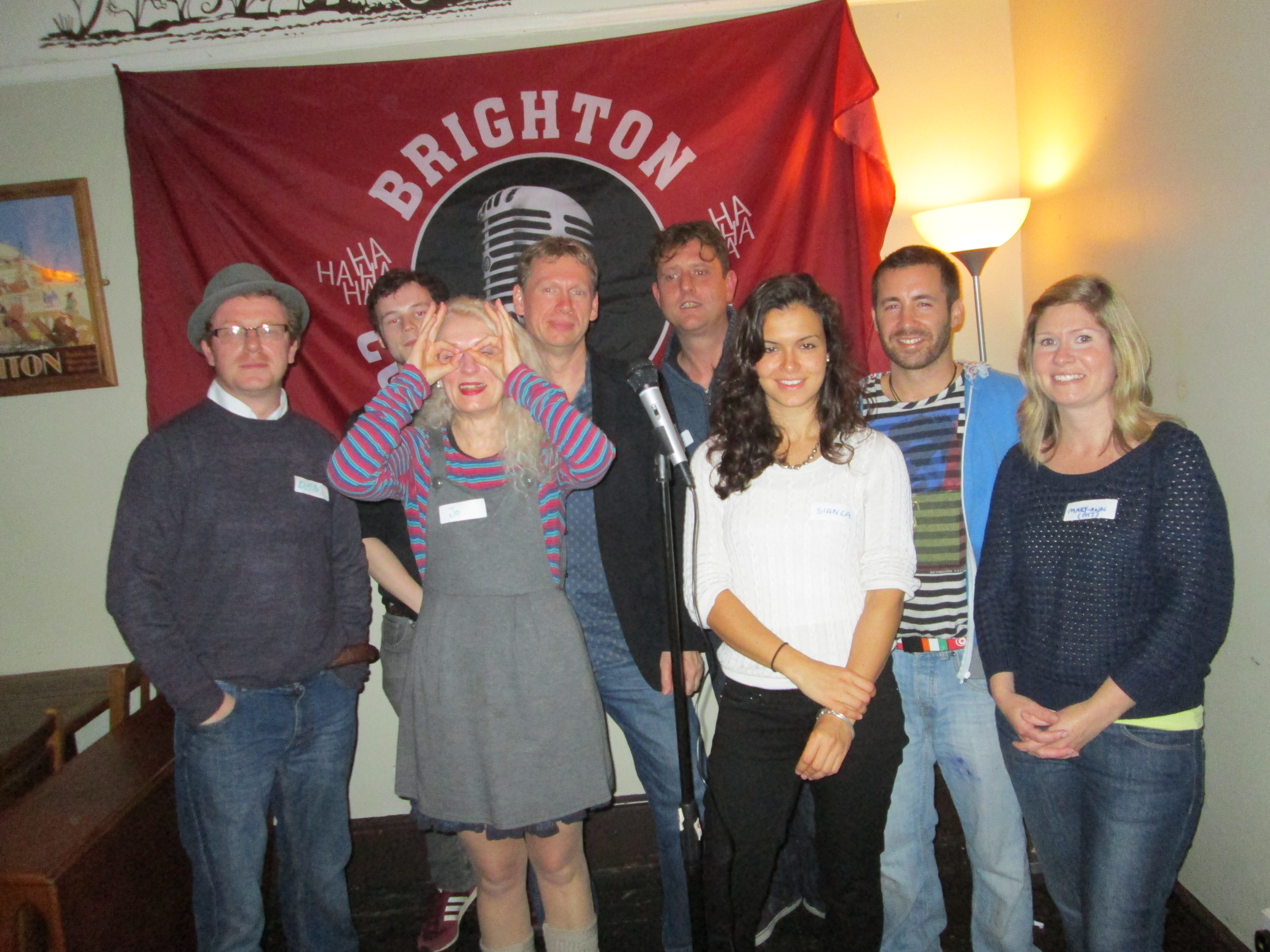 Some of the graduates from last nights gig

Last night was a fantastic graduation show. There were a few butterflies among the students but generally they were confident and on good form.

Zack Ward was the first act to take the stage. Zack is the youngest student who’s ever been on the course at 19, he was engaging and warm. His delivery was natural and he really hit home with the audience.

Peter Wood (aka Woody) went on next and delivered a mixture of one liners and retro jokes that had the audience chuckling away and the gig would not have been complete without the story of the X wife.

After the break Jo Wonder ascended on the stage in a white veil suited to the dead character she plays. With her dead pan delivery and strong Brummie accent she he soon had the audience laughing along and participating in her act.

Our final act, Indalo, took to the stage and entertained the audience with his quirky perspectives on the world and its inhabitants, calling the devil Captain Beige at one point, (it has to be seen!)

I think what I love most about these nights is seeing students who I’ve been working for 8 weeks complete their mission and get on that stage. All of them were beaming when they come off. The diversity of the acts just makes it so much more enjoyable too. It’s the ‘Stick in On’ of Comedy. You never know what’s coming up next. Well done to all, you did me proud. You can see the performances soon on You tube Brighton Comedy Course.

For more information on;

Dates for the diary