Covid-19 has had a huge impact on the comedy industry. Comedy clubs all over the world have been shut for almost a year. Most closed around March 2020. A few were open to a limited audience capacity before the current lock down, but is this sustainable?

Live Comedy Association (LCA) survey suggested an “industry in crisis”, with 77% of establishments saying they will close permanently within six months (August 2020).

Never before has the industry had such challenges. And unlike theatre, opera or visual arts, comedy is not supported by Arts Council England and does not receive funding from the Department for Digital, Culture, Music, and Sport (DCMS).

The Culture Recovery Grant administered by the Arts Council of England has, however, been opened to comedy venues. Many clubs up and down the country have applied for the grant.

The Komedia in Brighton has been closed for months though their team is planning a soft socially distanced re-opening for later in the year, providing that the health guidelines don’t change.

The manager, Marina Kobler says, “Times are not easy at the moment but we’re hanging in there and are determined to ride out the storm.”

Big name acts got behind comedy clubs in Scotland. Kevin Bridges and Frankie Boyle made a plea to the Scottish government to provide funding to help the highly acclaimed ‘The Stand’ Comedy Club with some success.

The Grand in Clapham, London, opened back up in August and asked audiences not to laugh too loudly to discourage the airborne virus and instead to stamp feet or clap to show their appreciation (what fun!). This followed the UK Government guidelines advising indoor event organisers to keep audience noise at a minimum. Audience numbers have been curbed substantially and face masks are obligatory.

Comedy clubs already have tight profit margins so this will be an end for many. The hospitality industry has been hit hard too. Many pubs host regular comedy nights. As a few pubs slowly start to open their doors, the social distancing rules make it difficult for these comedy nights to resume any time soon.

And of course, if venues can’t open then comedians can’t work.

Loss of earnings for comedians

There has been a loss of earnings and lack of support for comedians on every level worldwide. In the UK, there was no furlough for comedians. There were a few grants but nothing substantial enough to cover the expensive rents/mortgages and everyday living expenses incurred here.

Bigger comedians had tour dates cancelled. Comedians often make their money from these tours, and the tour’s revenue often covered their living expenses for the following months. Many who don’t have large management companies and agents will have invested their own money in these tours.

Comedians earn their money from working the clubs and as previously there may have been bar work or waitressing work to fall back on, the closing of the hospitality industry has made this impossible. Comedians have had to adapt, and many have taken jobs as cleaners, retail assistants and couriers.

Apart from the financial aspect, comedians genuinely miss the stage time and many worry about being rusty on their return.

I run several comedy nights in Brighton, England. These were the first things to be cancelled as the hospitality industry closed its doors. Pubs were already closing at a worrying rate. I dread seeing the hospitality landscape when this is over (or the disease infection is reduced to a manageable level).

So, all my comedy courses were cancelled. I had a beginner’s course with just two classes left to complete before graduating in front of a live audience. Their material and performance levels were in place to have a successful gig. They were gutted. Several of those students lost their jobs, and had to move back to the countries they’d grown up.

The impact that Covid has had on so many industries and individuals is shocking.

If there’s an upside

People found themselves with more time, to spend with family and to discover new skills. Baking was huge, and flour (like toilet rolls) were like gold dust.

I had my first book published How to Be a Comedian and Smash Your First Gig and then wrote the follow up, The New Comedians Handbook. I also had time to be interviewed by the BBC about the books. It’s unlikely that I would have found the time to achieve that goal while running a business and gigging.

There has also been plenty of opportunity to write new material. This is especially the case for comedians without home schooling, child minding and caring duties to contend with.

Comedians often complain that they struggle to find time to write. A gig is the perfect motivation to work towards, but comedians are an innovative bunch. Many are hosting Zoom meetings for fans, doing virtual gigs, producing podcasts, and writing books.

The outdoor gig and online comedy events have become a regular fixture in people’s lives.

Outdoor comedy has always been challenging. Keeping the atmosphere and focus on the stage and performer is generally more effective inside. In Britain, the weather doesn’t really lend itself to outdoor entertainment either. Noise outside can be as distracting for the audience as for the performer. Cars, motorbikes, ambulances, and noisy passers-by are all major distractions.

Online comedy gigs have received a varied response from audiences though the general feeling from comedians is that live comedy really needs a crowd for the interaction and atmosphere.

What is the future of stand-up comedy? Will the industry survive, and will it ever be the same?

I think YES. There will be casualties for sure. And it may be some way into the future before regular comedy nights return but people will always need a laugh and will always look to live comedy to provide it.

I’m confident we will laugh again, loudly and in person.

If you want to unlock your inner comedy genius, there’s the online comedy courses, interactive or module based, or there’s the beginners comedy course starting in Spring 2021, live and in person.

I am super excited to announce the launch of the new Step Up your Stand Up Workshops.

These workshops are for comedians working the circuit, not exclusively for Brighton Comedy Course graduates. For any comedian who wants to stand back and check what’s working well & what needs work. There will be plenty of expert advice, the opportunity to write lots of new material and hopefully lots of laughs. With the prework and actions to work on throughout the year I think these workshops are going to be a big hit. 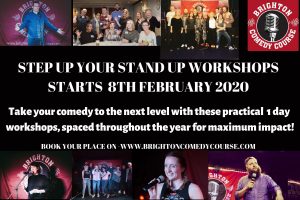 I’ve lost count of the amount of times I’ve been asked to run regular workshops like these that will motivate comedians to keep improving and progressing after the Advanced course. I think these workshops will do well and I wish I’d had something similar when I was aiming towards bigger comedy achievements (in 2000 BC.)

Delighted that I’ll be able to work with so many Brighton comedy course students but also to see the mix and development of many comedians working the circuit.

If you’d like more info check out the Step up Your Stand Up page on our website.

It’s been a very busy start to the year for Brighton Comedy Course. For the third year running the Beginners Comedy Course sold out. We moved to a lovely new premises, The Southern Belle in Hove, which as well as having a proper stage, also has its own PA system, great practice for our students.

This bunch are taking to the stage next Thursday the 11th of April at Funky Fish. 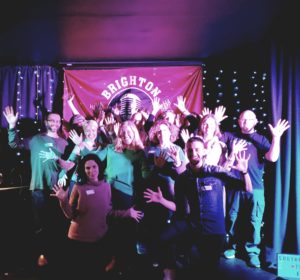 They have worked hard and have had me laughing every week. They’re gonna be brilliant. Come along, or watch the graduation videos’s on Brighton Comedy Course You tube channel

We’ve booking for the next Beginners course on May 28th. There’s lots of comedy options coming up though for people who want to try comedy out.

Here’s what’s coming up. Drop me a line if you have any questions, otherwise I’ll see you at the Funky Fish next Thursday. 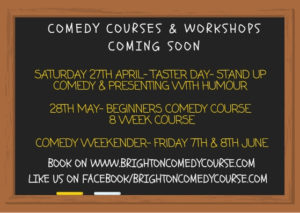